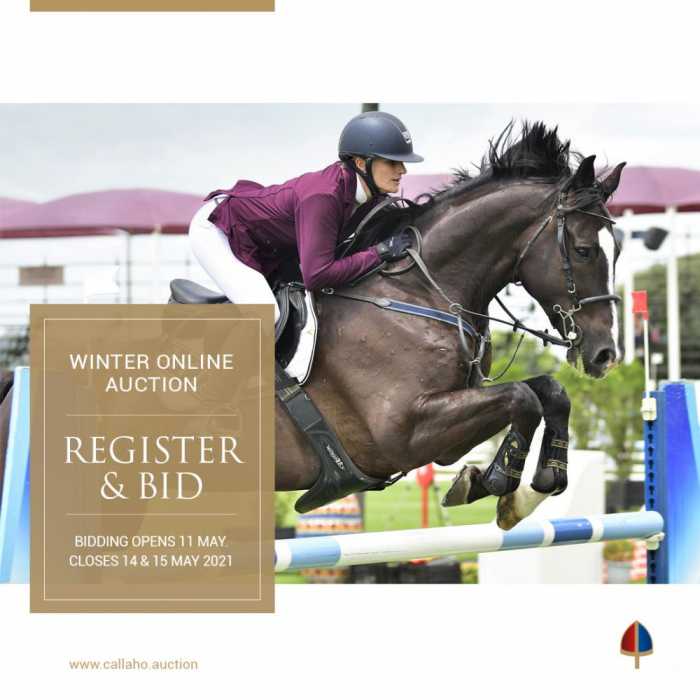 There were fireworks on the opening night of the Callaho Auction Winter Collection 2021. Fierce bidding wars, exciting lot extensions and high prices ensured viewers at home couldn’t afford to look away.

Callaho L’Ormarin (Lissabon/Dageraad/E-Pilot) set the tone for the evening, selling for an impressive R730 000. With talent to spare, the gelding demonstrates Callaho’s breeding experience, and will certainly light up the South African showjumping circuit in the near future.

Bidding on the eye-catching Callaho Vasco du Ayenne (Victory For Ever/Baloubet Du Rouet/Contendro I) eventually settled at R640 000. The depth of his performance dam-line underscores the remarkable potential of this gelding. Described by Callaho as being ‘equipped to become a very serious contender at the highest levels of the showjumping sport’, it comes as no surprise that he drew such attention.

Other highlights included Callaho Lisca (Lissabon/Stakkato/Caletto I) and Callaho Foreign Affair (For Joy/Concreto/Polydor), which both sold for R520 000. The former, a ‘supernatural talent’ according to the team, with a jump that needs to be seen to be believed, was an obvious favourite from the outset, while the latter’s price tag surely has much to do with For Joy’s storied reputation. Callaho Take Five (Tolano Van’t Riethof/Flipper D’Elle/Argentinus), a striking gelding, made R420 000. The first issue from a relatively new Callaho dam-line, Take Five promises to be a real force in the open classes. Remember that his mother, Vienna, is a unique combination of international jumper Flipper D’Elle and full sister to Arko III (Nick Skelton – 2005 European Championship and 2004 Athens Olympics).

The bargain of the first evening was almost certainly Callaho Balvenie (Bolzano Du Quinze/Escudo I/Ramiro Z) at R130,000. Whilst her French Anglo-Arab sire, Bolzano du Quinze, is relatively new to the South African breeding scene, it is certain that his influence will very soon be felt across the equestrian sport, through his new partnership with Gareth Neill. Top-notch jumper Callaho Beaumont (Bolzano du Quinze/Argentinus/Landadel) and Callaho Siguine (Sampras/Olala De Buissy/Veloce De Favi AA), a mighty mix of fire with the refinement of Anglo Arab blood, who both feature in tonight’s auction round-up, hold much promise. The foresight of those snapping up the Balvenie bargain last night is sure to pay off.

There can be little doubt that the South African equestrian scene gained some real talent last night, and we wish to congratulate each and every new owner on their purchase. We hope to see you, and your rides, in the ring soon.

Tonight’s half of the collection closes in just a few hours, and there is, once again, no shortage of talent on offer. From Callaho Tel Aviv, described as a ‘proper jumper well suited to the big classes’; to Callaho Benito, who provides a ‘rare opportunity for true connoisseurs of classical dressage’; and the Piquette grandson, Callaho Larido, with his ability to ‘uncap the limits of local breeding’, we are sure to be in for an exciting evening.

Finally, it is worth bearing in mind the hard work and dedication of the Callaho team behind last night’s outstanding sale. Callaho continues to produce top horses, and it’s clear that bidders recognise the stud’s ‘breeding magic’. Tonight looks certain to be another thrilling evening with Callaho Warmblood Sporthorses. Please join us – you wouldn’t want to miss it.