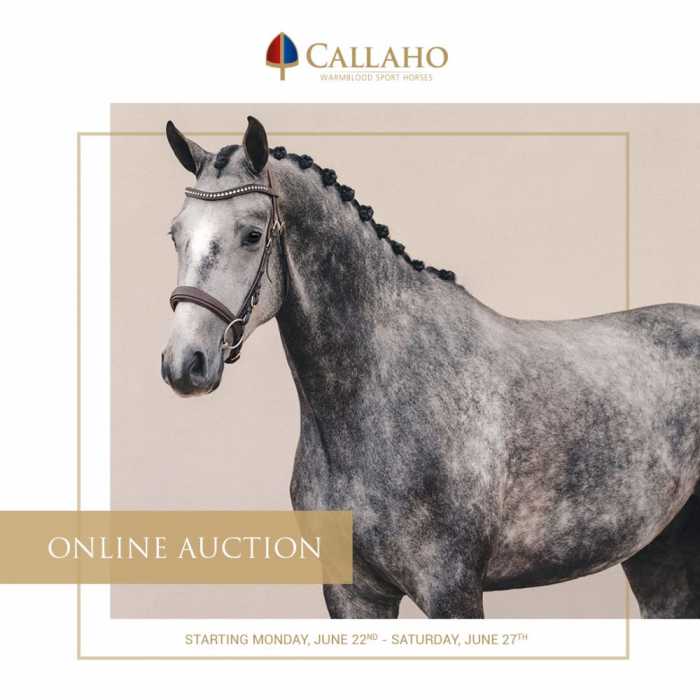 The penultimate evening of the inaugural Callaho Online Auction is going to be a tough one to top. Last night, suspense and record-breaking bidding kept spectators entertained right up until the last minute. Whilst there were some absolutely stunning lots and deservedly high prices across the board, the night really belonged to one horse – Callaho Corrigan.

Callaho Corrigan (Corinth/Heartbreaker/C-Indoctro) finally finished, after a fierce bidding war resulting in multiple lot extensions, on a record price of R1,37 million. This 16.3hh gelding, with a five-star vetting, and a pedigree to die for, had clearly captured the hearts of the showjumpers. With four of his six siblings already moving very quickly to the top of the open classes, it comes as no surprise that this gelding attracted attention and serious investment. We look forward to seeing him take the showjumping circuit by storm in the very near future.

Of the other nine sport horses and two broodmares on offer last night, the top performer, again requiring multiple lot extensions to allow bidding to finally close, was the charismatic Callaho Van Dango (Victory For Ever/Lord Pezi/Goldrausch I), who sold for a fitting R550,000 to a South African bidder. Van Dango is a known favourite amongst the Callaho Training Team, who will be thrilled to see him reaching a price in keeping with his special nature. Described by the team as an ‘absolute pleasure to ride’, ‘a super guy’ and a ‘top-rated showjumping prospect’, he looks set to be a superstar of the future.

Other notable lots include Callaho Larbin Din (Larison/Quidam’s Rubin/Cassini I), with her ‘care-free attitude and jaw-dropping jump’, who sold to a South African bidder for R460,000; and Callaho Sha Rukh Khan (Sampras/Stolzenberg/Argentinus), the ‘strong, bold horse with stellar rideability’, who went for a cool R320,000.

We’ll see you tonight for the final installment of this auction epic. There is even more serious talent and Callaho trademark quality on offer this evening - you won’t want to miss it.